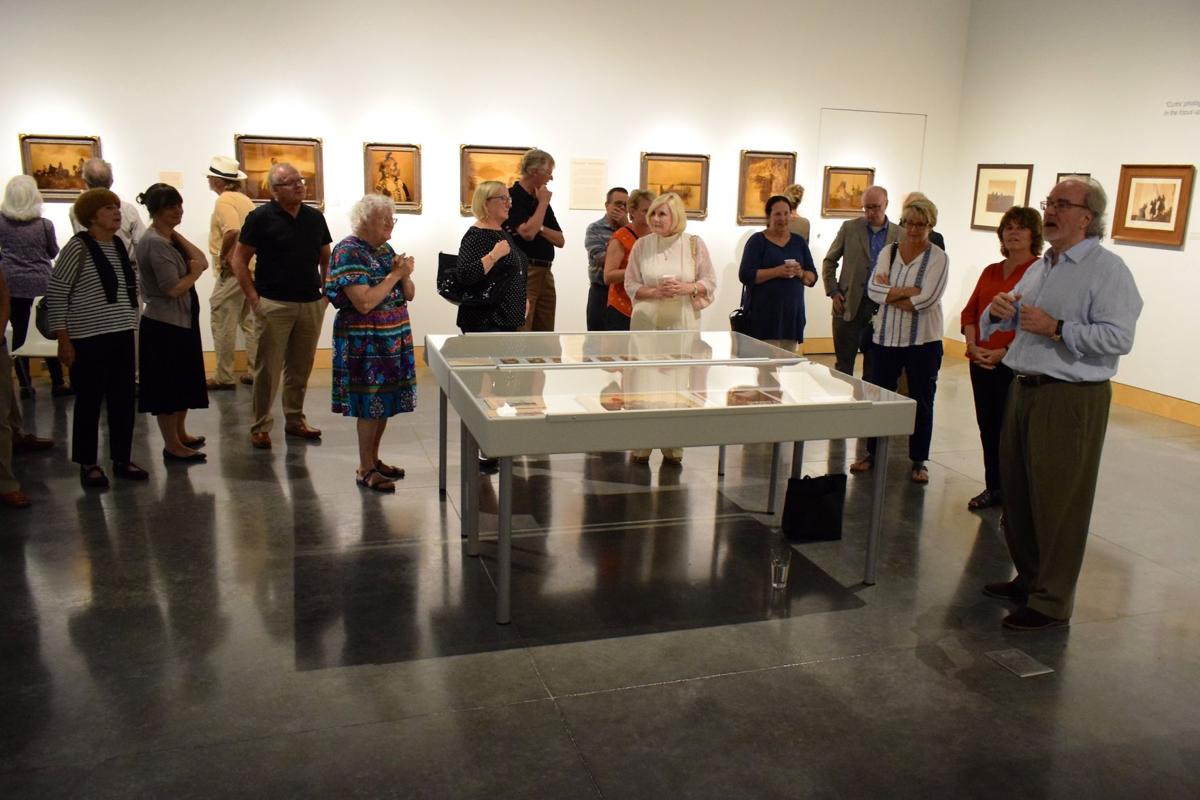 Christopher Cardozo, far right, speaks Sept. 4 during an opening reception for “The Realization of a Dream: The Photographs of Edward Curtis.” Cardozo is a leading scholar on Curtis, a famed photographer best known for his work from 1900-1930 documenting the cultures of more than 80 Native American tribes. (Sun Sailor staff photo by Jason Jenkins) 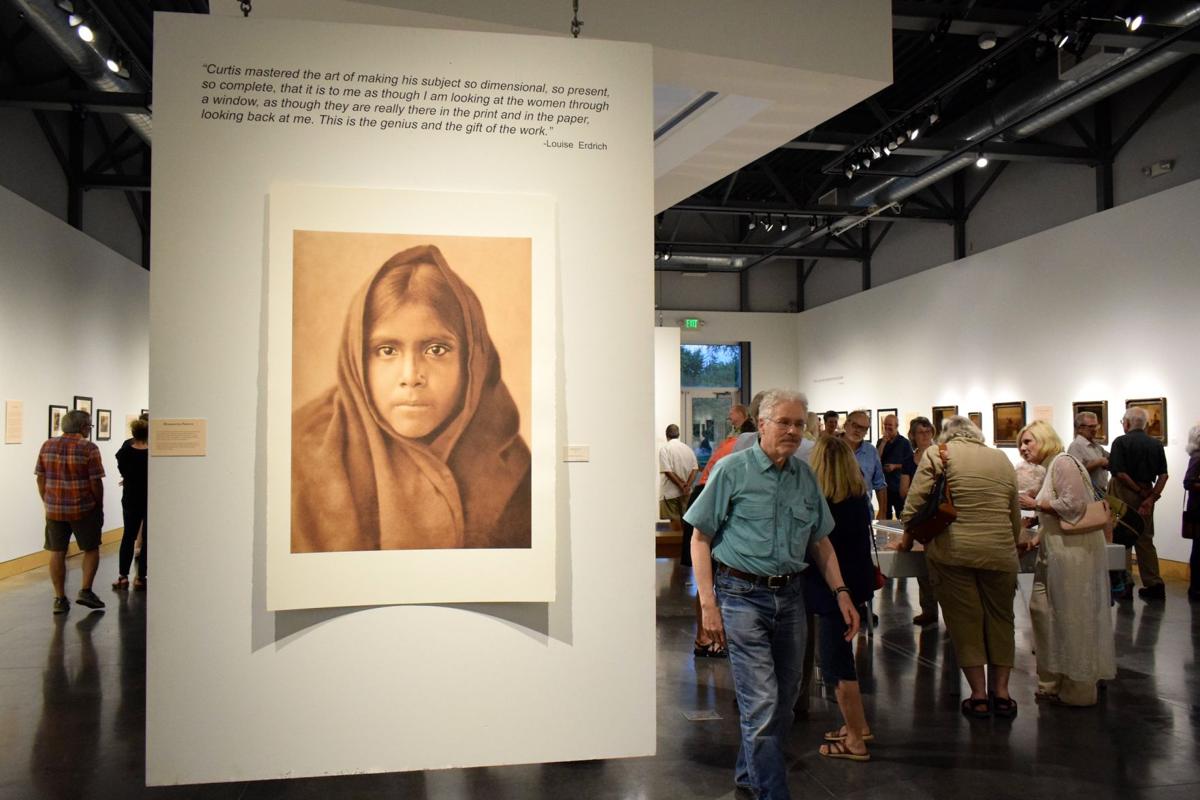 Visitors take in “The Realization of a Dream: The Photographs of Edward Curtis,” the latest exhibit at Minnetonka Center for the Arts. Displayed on a mammoth pigment print is “Qahatika Girl” from 1907. (Sun Sailor staff photo by Jason Jenkins) 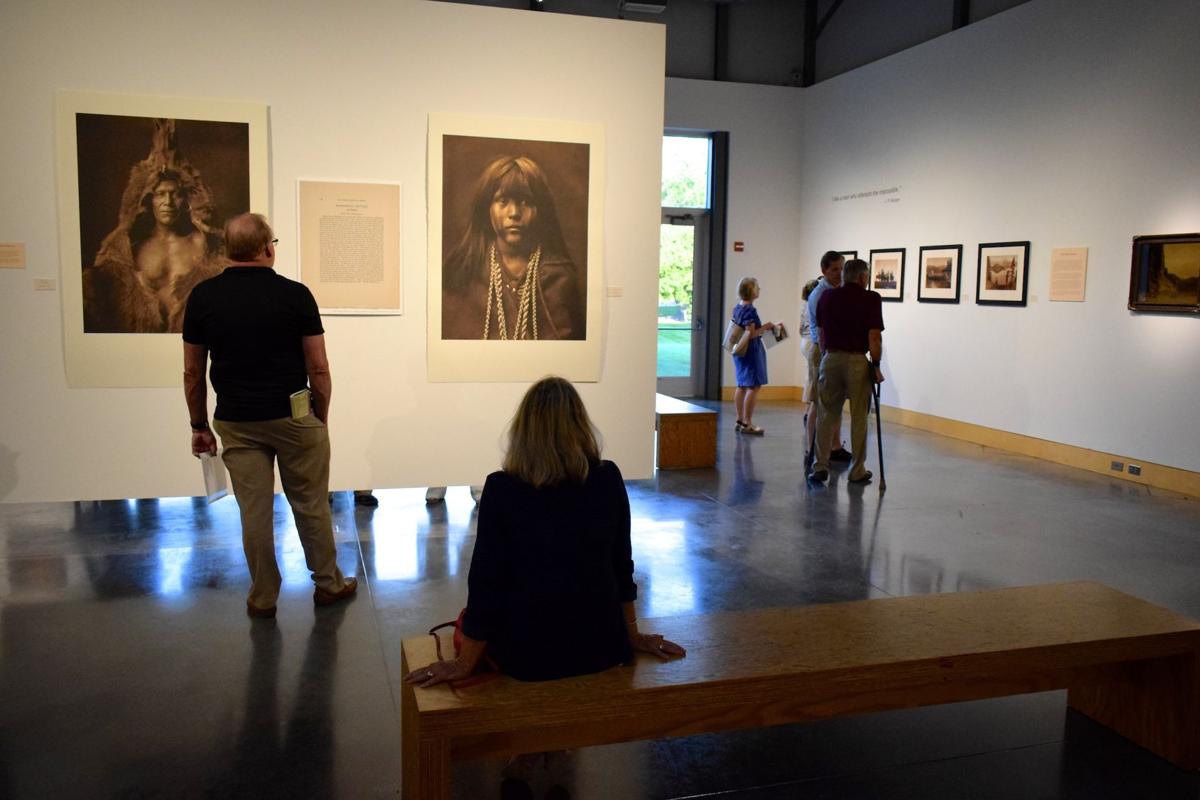 Visitors attend a Sept. 4 reception for “The Realization of a Dream: The Photographs of Edward Curtis,” the latest exhibit at Minnetonka Center for the Arts. (Sun Sailor staff photo by Jason Jenkins) 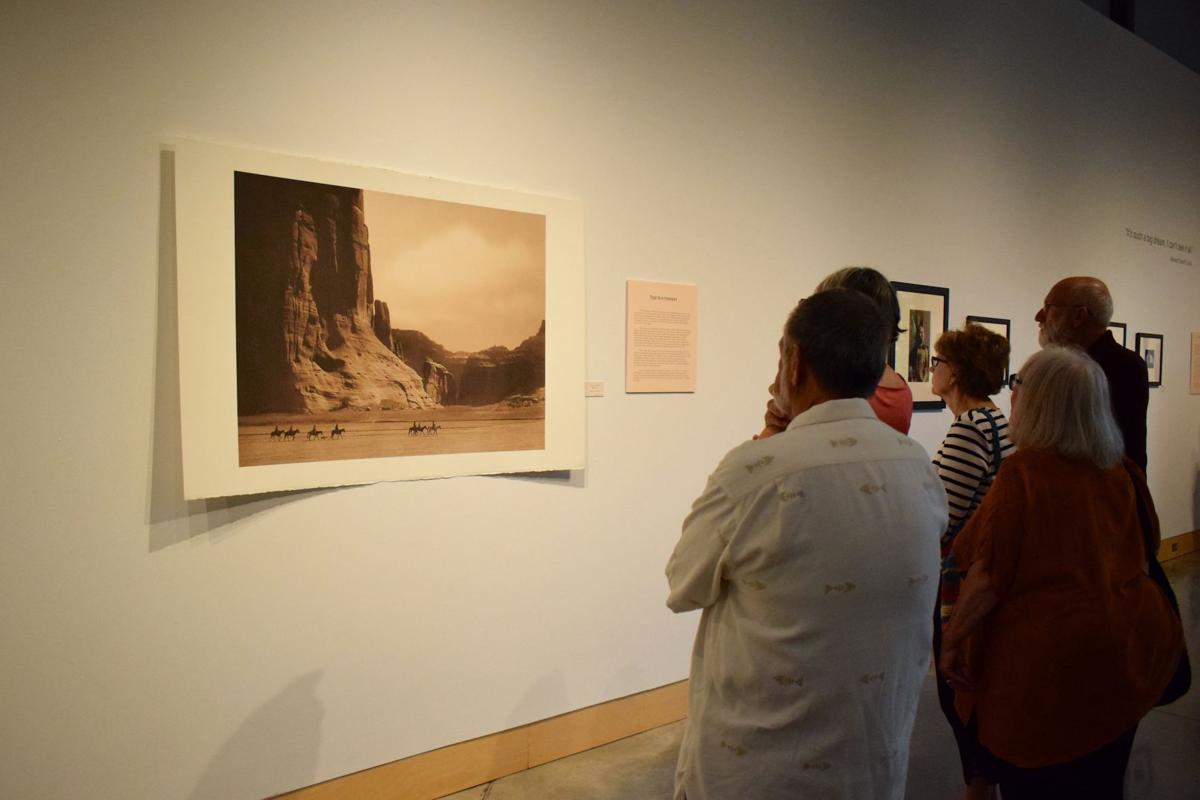 A mammoth pigment print of “Canyon de Chelly,” taken in 1904, is among the Edward Curtis photographs currently on display at the Minnetonka Center fro the Arts. (Sun Sailor staff photo by Jason Jenkins) 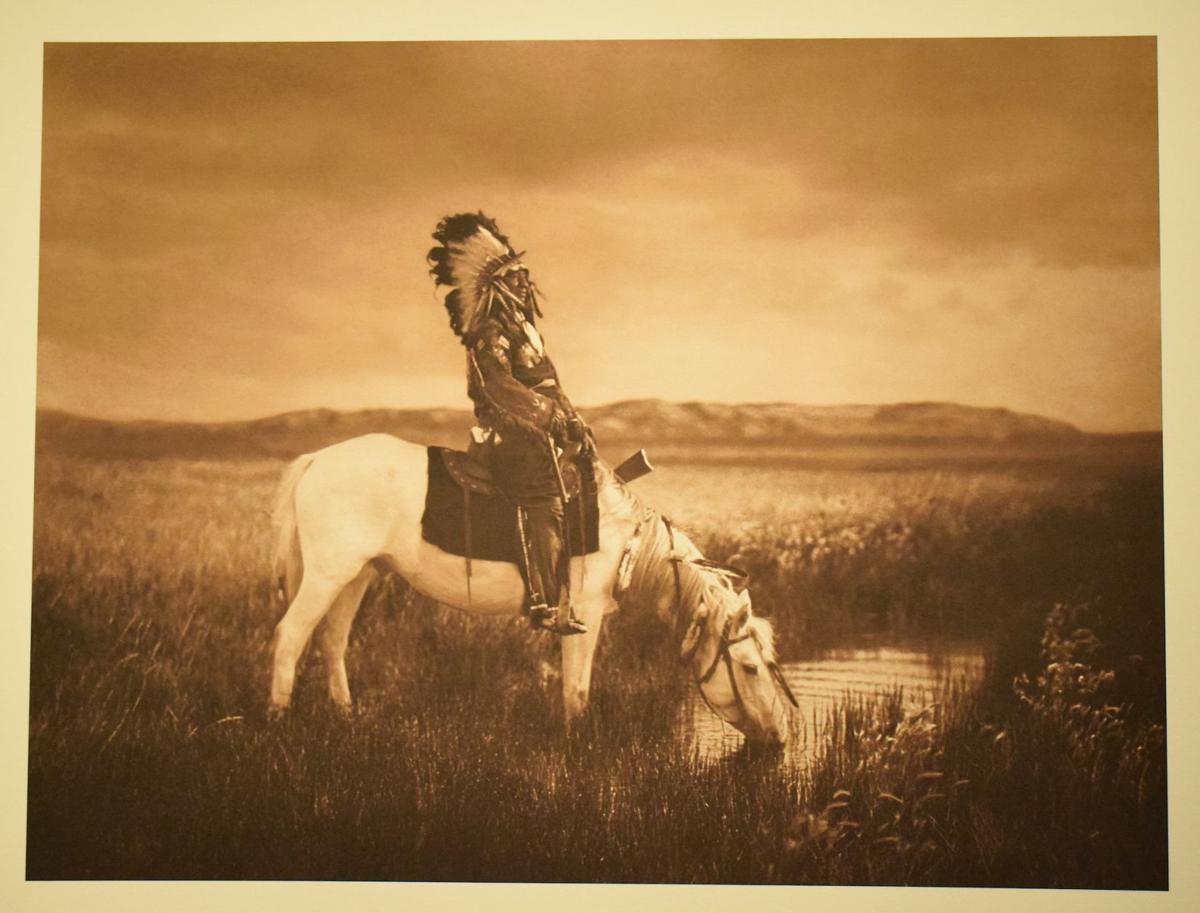 “An Oasis in the Badlands,” a 1905 photograph by Edward Curtis, shows Red Hawk, an Oglala warrior, sitting on a horse that is drinking from a small pond in the Badlands of North Dakota. (Edward Curtis - Christopher Cardozo Fine Art) 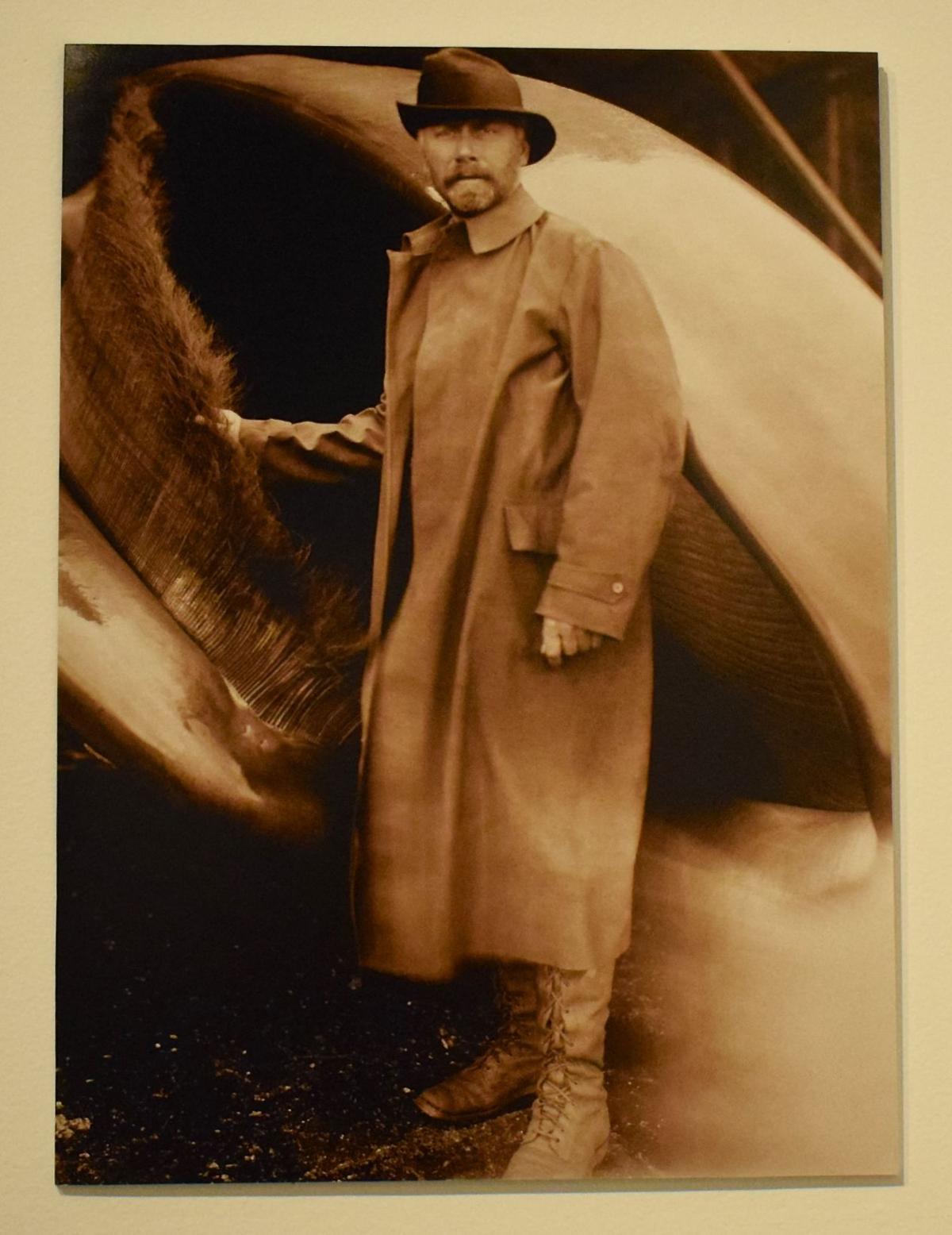 A self-portrait of Edward Curtis with a whale in the Pacific Northwest, circa 1914. (Edward Curtis - Christopher Cardozo Fine Art)

‘The Realization of a Dream’ exhibition will be open through Oct. 25

In celebration of the 150th anniversary of photographer Edward Curtis’ birth, the Minnetonka Center for the Arts is inviting guests to an exhibition showcasing his landmark body of work.

Curtis is best known for publishing the 20-volume “The North American Indian,” which is considered the most ambitious and expensive photographic project ever undertaken. Between 1900-1930, Curtis visited more than 80 Native American tribes, documenting their cultures and producing more than 40,000 photographs. His time with the tribes also generated 10,000 wax cylinder recordings, 4,000 pages of anthropological text and a feature-length film.

A selection of Curtis’ photos can be found on display at the arts center through Oct. 25 at 2240 North Shore Dr., Wayzata.

The exhibition, “The Realization of a Dream: The Photographs of Edward Curtis,” is curated by leading Curtis scholar Christopher Cardozo and features large-scale prints made from Curtis’ negatives as well as original Curtis photographs.

Cardozo, a Minneapolis resident, was at the Sept. 4 opening reception of the exhibit. There he spoke to gallery visitors and provided a brief background on the famed photographer.

Curtis was born in 1868 near Whitewater, Wisconsin, and moved to southern Minnesota at the age of 4. By the late 1880s, he and his family had moved to Seattle, where Curtis’ interest in photography flourished as he began earning a living through his craft, despite the fact that he had only a sixth-grade education and was raised in abject poverty.

“He had so many things stacked against him, but he persevered,” Cardozo said.

While taking photos in 1898 at Mount Rainier, Curtis rescued a group of lost mountaineers. Among the men was George Grinnell, an expert on Plains Indians, and C. Hart Merriam, a co-founder of the National Geographic Society and chief of the U.S. Biological Survey. This chance connection would soon lead Curtis toward his mission of documenting North America tribes.

In 1900, the photographer embarked on a project that would take 30 years and the equivalent of $35 million in today’s dollars to complete.

With help from several prominent figures, including J.P. Morgan, Theodore Roosevelt, Andrew Carnegie and the kings of both England and Belgium, Curtis succeeded in creating the acclaimed photo-ethnographic study.

It’s estimated that 10,000 Native Americans participated in the project, which aimed to create a record of their personal histories and beliefs for future generations.

As part of the exhibition, Cardozo will offer several opportunities to dive deeper into the life and work of Curtis and how his images are being brought to new audiences today.

Cardozo will discuss more than 60 iconic Curtis photos and explore what his work can teach people today at a presentation 7-9 p.m. Thursday, Sept. 20, at the Minnetonka Center for the Arts.

On Saturday, Oct. 6, master printer Peter Bernardy will introduce and discuss the photographic processes Curtis used to express and communicate his vision. The presentation will run 1-3 p.m. at the arts center.

Then, on Saturday, Oct. 13, Cardozo will take 20 participants on a tour of his St. Paul studio, where he and Bernardy will discuss how they have worked with an archive of more than 3,000 original Curtis photographs to faithfully recreate a select group of Curtis’ most iconic and sought-after images.

To learn more about Curtis and his work, visit edwardcurtis.com. For more info on the exhibit, visit minnetonkaarts.org/realization-photographs-curtis.

Copyright © 2018 at Sun Newspapers. Digital dissemination of this content without prior written consent is a violation of federal law and may be subject to legal action.