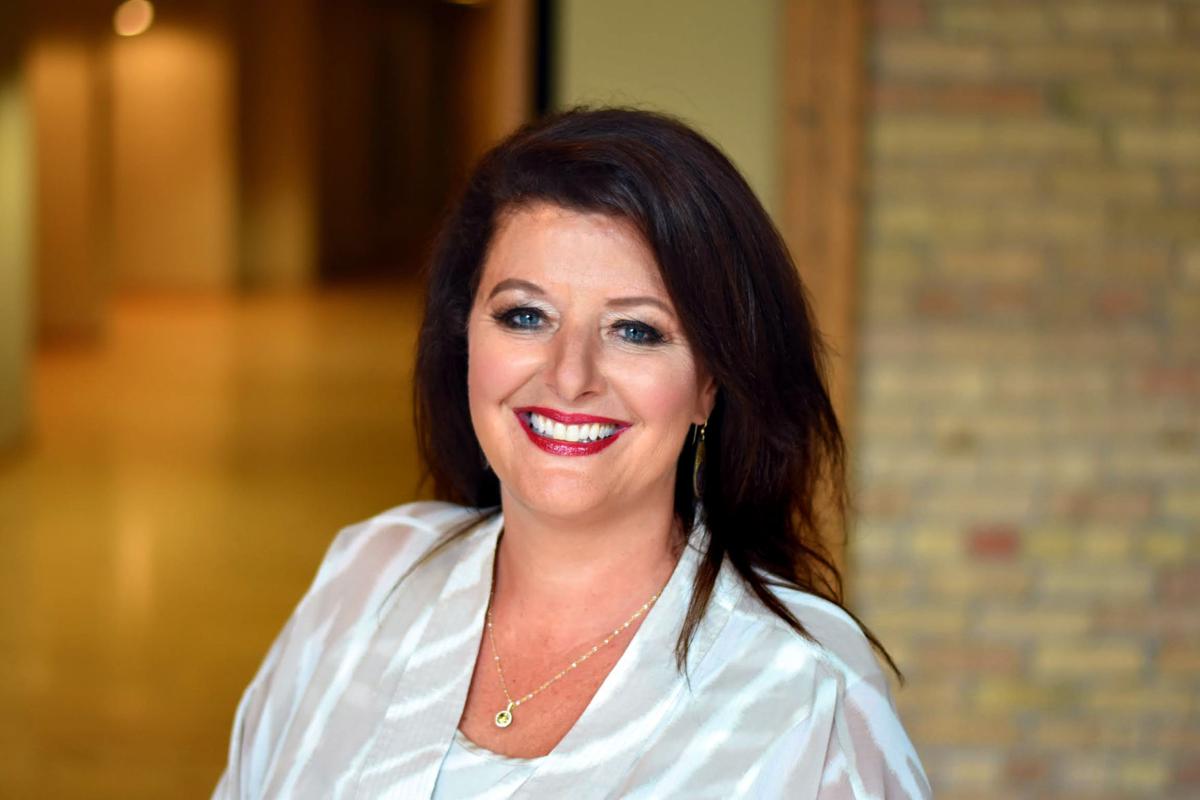 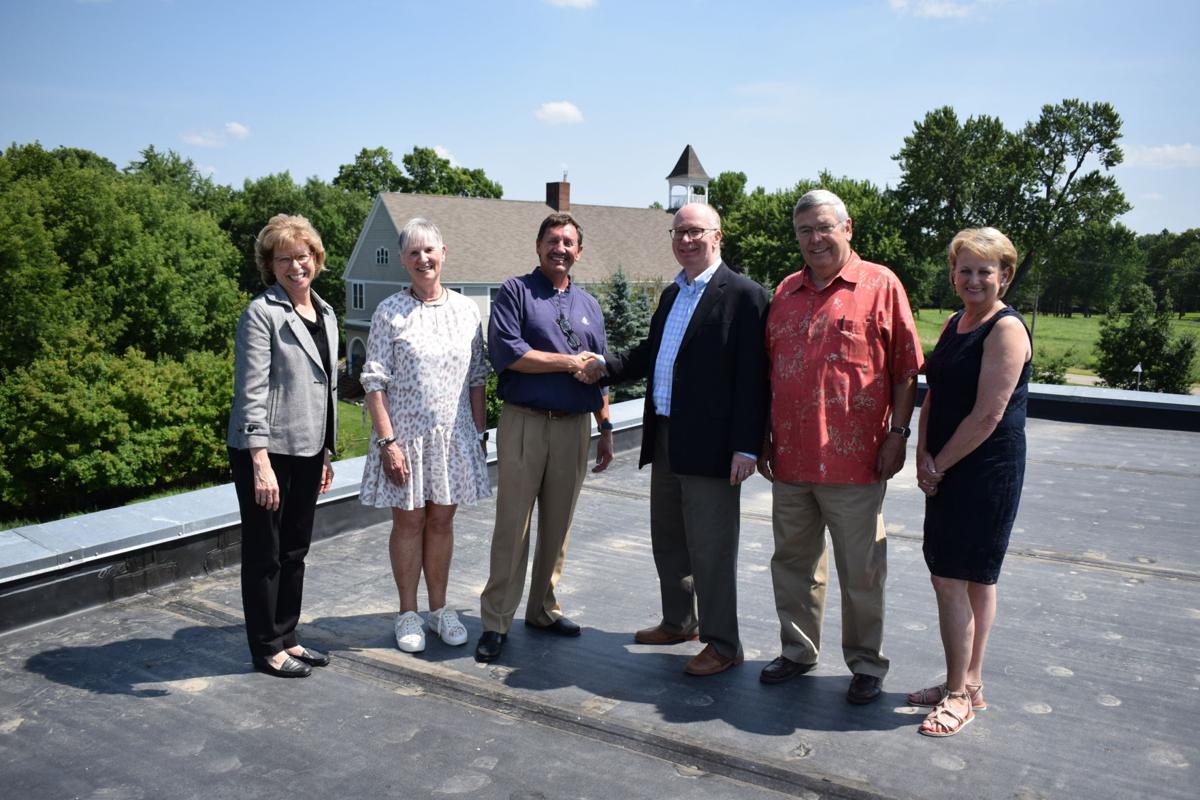 A new roof was recently installed at Minnetonka Center for the Arts. The cost for the $500,000 project was covered by a donation from Caroline Amplatz, a longtime student of the arts center. Shown celebrating the new roof are, from left, arts center executive director Roxanne Heaton, board member Katie Searl, Orono Mayor Dennis Walsh, board chair James Schwert, board member Terry Savidge and board member Cynthia Dyste. (Sun photo by Jason Jenkins) 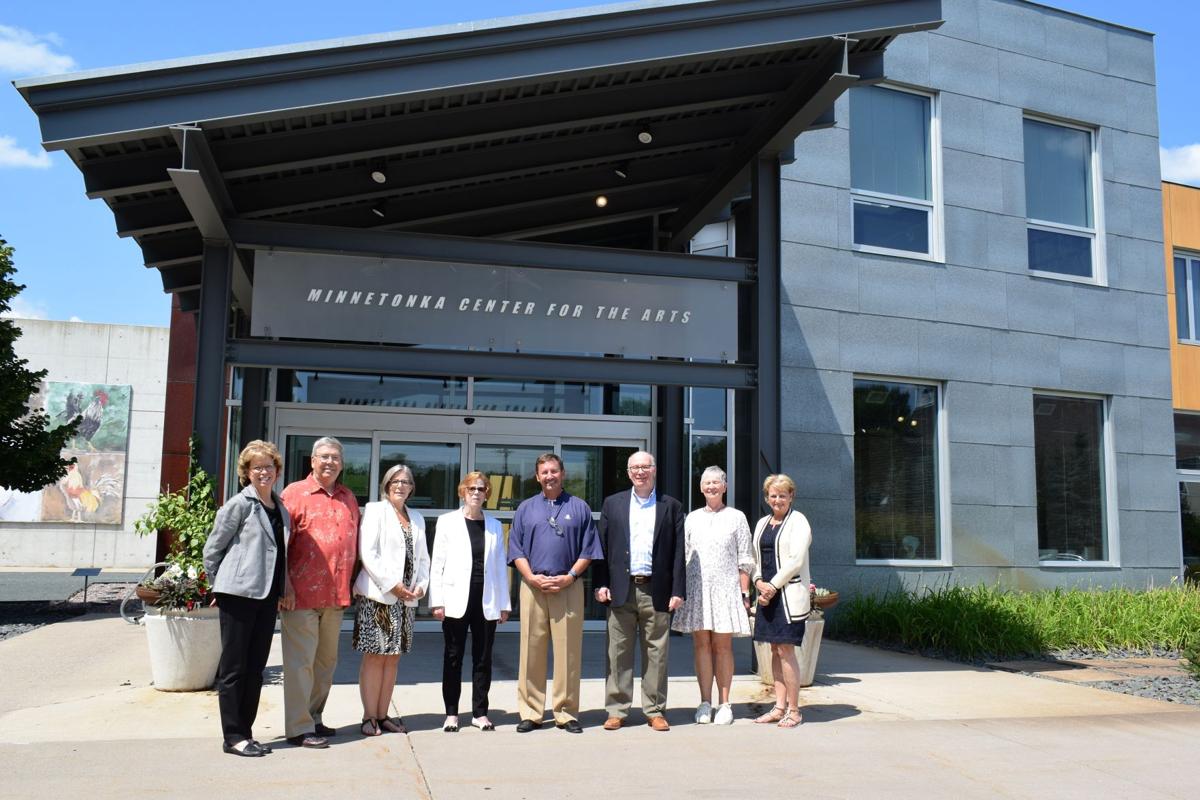 Leaders with the Minnetonka Center for the Arts met July 24 with the mayor of Orono to celebrate the installation of a new roof for the nonprofit arts center. The cost for the $500,000 project was covered by a donation from Caroline Amplatz, a longtime student of the arts center Shown celebrating the new roof are, from left, arts center executive director Roxanne Heaton, board member Terry Savidge, incoming board vice chair Denise Leskinen, incoming board chair Barbara McBurney, Orono Mayor Dennis Walsh, board chair James Schwert, board member Katie Searl and board member Cynthia Dyste. (Sun photo by Jason Jenkins) 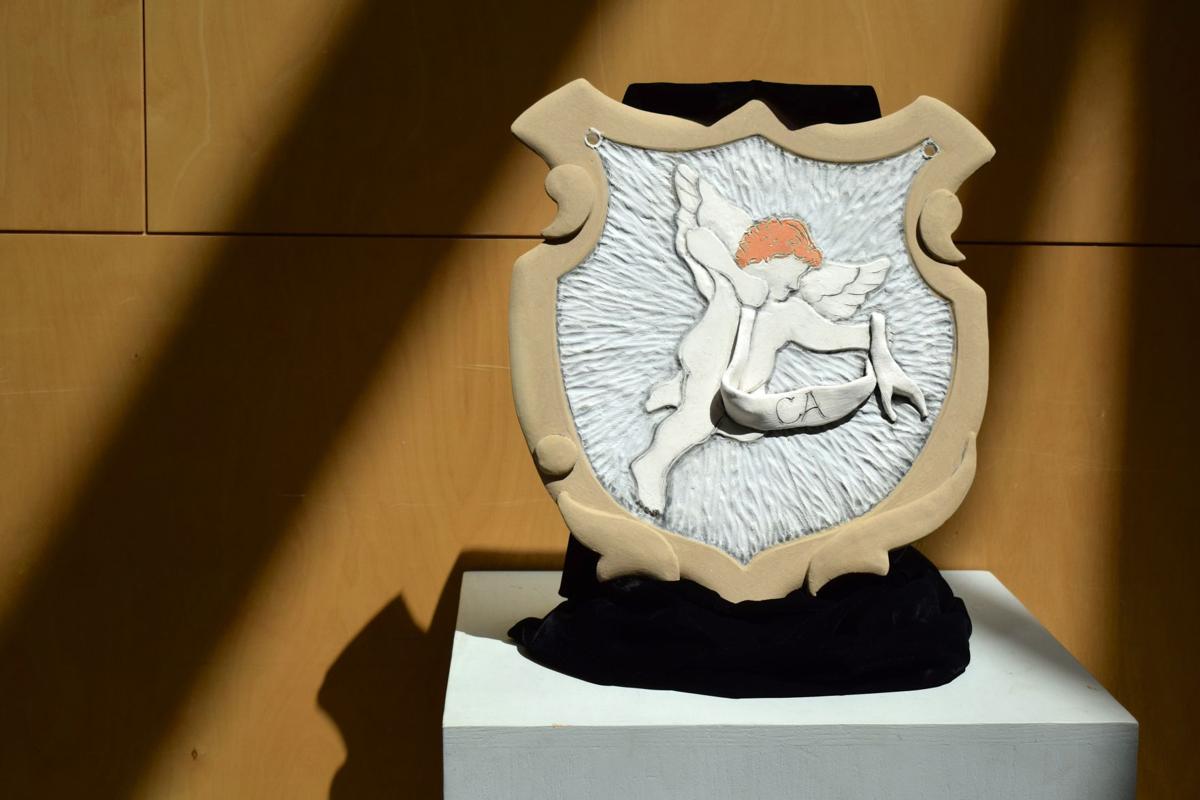 Minnetonka Center for the Arts will hang a sculpture of an angel emblem at the arts center in recognition of Caroline Amplatz and her donation, which covered the more than $500,000 needed to replace the roof of the arts center. (Sun photo by Jason Jenkins)

Cost of $500,000 project was covered by a donation from Caroline Amplatz

Roxanne Heaton, executive director for Minnetonka Center for the Arts, remembers the stress ratcheting up with every new leak.

The roof of the nearly 20-year-old arts center began letting in water five years ago, prompting major repairs that extended the life of the roof another few years.

“A roofer told us at the time that if we’re lucky we were going to extend the life of the roof by three, four or five years, but then we would need to replace it,” Heaton said. “We were putting band-aids on what was clearly a much bigger problem. It was a terrible source of concern for a lot of us.”

Right on cue, the roof began leaking again. Staff members of the arts center placed buckets to catch dripping rainwater wherever needed. Heaton knew they’d have to replace the roof, a project that was estimated to cost more than $500,000.

“It’s a huge undertaking,” she said. “We don’t have that kind of money sitting in reserves waiting.”

The arts center was considering launching a capital campaign to raise money for the project when Heaton had a fateful conversation in March with Caroline Amplatz, a longtime student of the arts center.

Heaton said she was standing near the main entrance of the building when Amplatz, who used to live down the road from the arts center, began asking questions about the buckets that had been placed in the hallway to catch dripping water.

“She asked me what it would cost to repair, and I said, ‘No, you don’t understand. We can’t repair. We have to replace. It’s been repaired too many times,’” Heaton said.

Amplatz was adamant about finding out what it would cost replace the roof, Heaton said. After informing her that the project would likely cost more than half a million dollars, Amplatz shocked Heaton with her response.

Amplatz stayed true to her word and covered the cost of the project. Workers began replacing the roof in April and by the end of May the project was mostly finished.

“She has a lot of respect and a lot of appreciation for the work that we do, and she’s just very community minded and philanthropically minded,” Heaton said of Amplatz. “She puts her money where her beliefs are. It’s been extraordinary for us.”

Amplatz has a history of philanthropic giving around the Twin Cities. In 2015, she gave $3 million to the Cowles Center for Dance and the Performing Arts in Minneapolis so that it could renovate its Arts and Education Wing. Amplatz’s largest gift was a pledge in 2009 for $50 million for the University of Minnesota’s new pediatric hospital. The gift was made in honor of her father Kurt Amplatz, who was a radiologist at the University of Minnesota and a pioneer of medical research and medical devices.

Minnetonka Center for the Arts is planning to hang a sculpture of an angel emblem at the arts center in recognition of Amplatz and her donation.

“That angel is kind of her personal logo. ... And we got to talking about her as ‘the roof angel,’ so it sort of fit,” Heaton said.

Minnetonka Center for the Arts provides visual arts education for all ages, interests and abilities at its location at 2240 North Shore Drive, Wayzata, and through its community outreach programs.

Copyright © 2019 at Sun Newspapers. Digital dissemination of this content without prior written consent is a violation of federal law and may be subject to legal action.